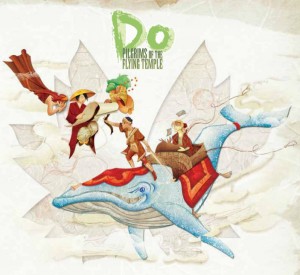 Let’s get in trouble with the flying pilgrims!

From: Bundle of Holding +4

Today I bring you a storytelling/writing game from Daniel Solis, who also designed the cute writing game Happy Birthday Robot (which we converted into Happy Birthday Zombie by mashing it together with Zombie Dice). Do: Pilgrims of the Flying Temple is a slightly more advanced game, but similar in many ways.

In this game, you play Pilgrims – teenagers sent out from the Flying Temple in the middle of this universe to solve problem and grow up on the way. (This is actually somewhat similar to Vincent D. Baker’s Dogs in the Vineyard, though the similarities more or less stop there). The world of the game is heavily inspired by Antoine de Saint-Exupery’s The Little Prince, with loads of little planets, each with their own community to encounter and interact with. The Pilgrims can fly from planet to planet, and will encounter a situation to solve on each planet they visit.

Generating characters in Do is simple: just make a name for your Pilgrim. A Pilgrim’s name consists of three part: First, the title “Pilgrim”, then a Banner, and finally an Avatar. The Banner is an adjective or descriptor, and indicates the way the Pilgrim gets into trouble, while the Avatar is a noun that indicates the way the Pilgrim helps people. So Pilgrim Green Tree gets in trouble by being inexperienced, while she helps people by nurturing and growing things. At the end of each session, either the Banner or the Avatar will change to reflect what has happened to the Pilgrim during the session – and when the character is ultimately retired, she will have undergone many changes, and be a more grown up character than when she started.

Once you have your characters, you need a world with problems for he pilgrims to solve. To this end, the game comes with a number of letters, written by people desperate for help by the Pilgrims. The letter will describe the situation the writer finds him or herself in. Besides that, there are 20 Goal Words that the Pilgrims will be trying to get through, and some round icons, indicating what kind of issues the letter is likely to involve.

You continue taking turn as Storyteller until someone has eight stones, at which point you end the session. If you managed to cross off all the Goal Words, you get sent off with a parade – otherwise, you get chased away with pitchforks. Then you do a brief epilogue and change your Pilgrims’ names.

The book is beautifully decorated, with a nice parchment look and loads of pretty and evocative drawings. The letters in particular are presented very nicely, in a way that is not only inviting, but also helps set the scene for the particular world the Pilgrims are visiting today.

My impression: I am quite charmed by this book. The setting is nice and very inviting, and it seems to invite some lovely storytelling about the Pilgrims. There are a fair number of moving parts, but I think it will be easy to keep it going, even with relatively young players.

The game comes with a lot of advice for the players. This is a good thing, in that it can help inexperienced players get into the game. On the other hand, I think the game requires an adult to communicate the advice to younger players, and help them understand the advice.

My main concern with the game is whether it will feel rewarding in the end. Writing down sentences takes a fair while, and I’m a bit worried that it will drag down the game and make it feel slow. Particularly as you’ll only do one sentence whenever it is your turn. This means that the game will probably last 3-5 rounds, amounting to somewhere between nine and 25 turns. Granted, nine is quite unlikely, but it is certainly possible, and would hardly be enough for a satisfying game. Of course, players can willingly extend the game by taking the lesser number of stones, which may be needed to get the parades ending.

This is of course purely speculation. It is a bit difficult for me to predict how the game will feel when you play it. As it stands, the game is a compelling invitation to a fun session of storytelling. And the book itself is a beautiful and very inviting piece that makes me feel welcome and in good hands. As such, I could definitely see myself recommending this to teachers and parents, even those without storytelling, writing or roleplaying experience, to use with their kids.

How would I use this: I would love to do a session or two of this. I doubt I’d want to do repeated plays of this with the same group of adult players, but if I ever go back to teaching creative writing for adolescents or young adults, I might very well consider bringing this along. I am also considering taking it along to play with some of my family over Christmas – this game could certainly appeal to people without any roleplaying experience at all.