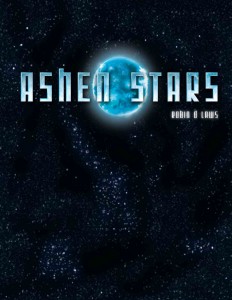 Freelance Justice among the fading stars

From: The Bundle of GUMSHOE

Today I’m looking at Ashen Stars from the Bundle of GUMSHOE, a bundle that contains this game, the police procedural Mutant City Blues, and Ken Writes About Stuff and See Page XX, two series of articles by GUMSHOE designers, Robin D. Laws and Kenneth Hite. It was a toss-up between this and Mutant City Blues, but in the end, I decided to go with Space Opera over police procedural with super mutants. Ken Writes about Stuff and See Page XX was interesting as well, but I’m more interested in the cohesive systems, not least because I have yet to play any GUMSHOE.

GUMSHOE (for those who don’t know) is a system designed by Robin D. Laws to facilitate good investigative roleplaying. In GUMSHOE, a character will never have to roll to find important clues. If you have the right skills, you will find the relevant clues. This system has been implemented in a number of different ways. First in Laws’ Esoterrorists game, a game of occult investigation, and most famously in Kenneth Hite’s revamp of Call of Cthulhu, Trail of Cthulhu.

Ashen Stars takes GUMSHOE to the stars, with a space opera setting reminiscent of Star Trek, Babylon 5 and Firefly. The game is deliberately set after the end of the galactic utopia, in a time of restoration after a great calamity. Ten years ago, a great war against a terrible enemy came to a close, and now the Combine of all the planets is licking its wounds and trying to rebuild.

This means that there is not enough resources to maintain control and safety in all the areas once under firm central control – notably the Bleed, the outer edge of the settled universe. Enter the Lasers – freelance lawmen and problem solvers. They travel in small groups from planet to planet, being hired to come solve crimes and deal with problems.

The role a character fulfils within a crew is used as a jumping off point for character creation. You have a Warpside role – like Pilot, Communications or systems – and a Groundside role – like Cultural, Operations and Survey. Each package will give you certain skills. You also get to pick out some skills on your own.

Of course, this being proper space opera, you also have to select your species, choosing from seven different options, including humans and the Cybes – humans who have been so heavily modified by cybernetics and genetics that they have turned into another species. The races are quite different, both in abilities and in their outlook and culture. The outlook is reflected mechanically in the drives available to each race. Drives are expressions of what drives each character, and each race apart from humans has a list of appropriate drives including one or more that only they can take.

Each player will also make a “personal arc” for their character. A personal goal centres around a special goal that the player wishes to accomplish, then adds details about what he wants to achieve. In this way, the players will each have something that can engage that player and throw spotlight on his character, just as each of them will be contributing something to the structure of the campaign.

Speaking of the campaign, the book gives a good overview of the main political realities of the Bleed. Then it provides the tools to create worlds, fraught with problems for the PC’s to deal with. The world creation guide is a very easy-to-follow process, where each step allows you to create interesting problems, and worlds to go with them. The game also has rules for creating and structuring the cases that the players will encounter in a given session. Again, the game provides a very well structured and easy-to-grasp guide.

It does seem that there is a certain overlap between creating worlds with problems and creating cases, and I am not entirely sure where the difference lies. In one, you create a world with a problem the players need to solve, in the other, you create a case for them to solve. The chapter on creating scenes gives a lot more detail, as it’s the chapter to actually tell you how to run the game.

My impression: I am actually quite impressed with this game. It looks like a very interesting and engaged take on an investigative game. It also sounds like it has a good spin on space opera, sufficiently in line with genre conventions to engage the fans, while different enough to feel different.

The alien races are more than just stats and outside description; instead, the descriptions are written from the point of view of each race, and gives a good introduction to how the races think, feel and act. This gives a lot of good input into playing members of each species.

Finally, I really like the drive and personal arc. Drive gives you a good indication of what the character cares about, while the personal arc allows you to build a story into the game that is about something you care about, and something that is about you.

The chapters for the Game Moderator are also quite good. The rules for making worlds and cases help the GM make good stories that evoke the feel of the game, and make sure that there is enough interest for the players to engage with. The chapter on running the game also includes loads of good general advice on being a good GM, and I wouldn’t hesitate to recommend this to a relatively new GM, as long as they know something about Space Opera and investigation.

I have an idea for a Space Opera game using the Apocalypse Engine rattling around in my brain, which was par of why I wanted to look at this game here. But after reading it, I’m wondering if I might not want to take this game out for a spin sometime. It is also reminding me a lot of Star*Drive, and making me itch to take a look at that again.

How would I use this: If I ever wanted to host a game of investigation in space, I might definitely look here. Like I mentioned above, I have an old love for Alternity’s Star*Drive, but this is probably more accessible and less clunky mechanically. I might also well decide to use it if I ever teach adolescents about roleplaying – this is very accessible in both mechanics and theme, and so it might well be a good way to introduce them to investigation.

One thought on “13th of December: Ashen Stars”