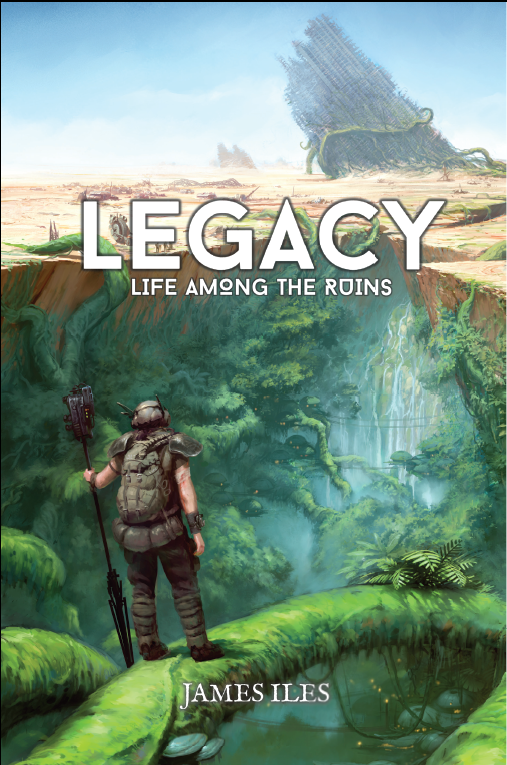 A Powered by the Apocalypse game about families surviving in the generations after the Fall.

Legacy is the illegitimate love-child of Apocalypse World and Microscope: A game about families surviving in the generations following a great apocalypse, laying the old, advanced society in ruins, and leaving people to make their way in the mess that’s left behind, digging out old technology when they can. The game is intended to take place over a series of ages. Throughout the ages, each player will control a family as it develops, creating a particular family member to play in each age.

My impression: The first thing jumping out at you when leafing through the book is the wealth of full-colour, very evocative images that saturate the book. They are not strictly necessary, and they would make it more difficult to print out the text for use at the table (a print-friendly version of the pdf might have been nice), but they definitely make the idea of the game come alive. Particularly the images of the different Family- and Character playbooks really communicates what each is all about.

I bought this bundle, not least because I was really curious about the concept of the family playbook. It is a way to do a powered by the Apocalypse (PbtA) game that I haven’t seen elsewhere, and it sounds like a really interesting adaptation of the system. As it stands, the families clearly provide the flavouring of the game, the Character playbooks being much more about providing a certain function for the family. I like this concept, and I quite like the different Family playbooks, as well. The Character playbooks seem a bit more bland to me, but that’s OK; they are not the main focus of the game.

Unfortunately, it feels like the game has negated this part of the game a little too much. I have only skimmed the game book, and as such, I may easily have missed something. Still, I have a difficult time telling you precisely what you’ll be doing with the character and why. Encountering threats to the family? Sure. But where do they come from? And why are all these characters going at it together? What if one family has a radically different objective to the others this age? Do we then tell two parallel stories, bearing in mind that an age is supposed to take 2-5 sessions? I lack some more guidance to help me – either as player or as GM – kick off the action of the age.

That’s a pity, because the rest of the book indicates a careful attention to making the book accessible to beginners, particularly to GM’ing PbtA games. The game is complex, but I think the mental barrier to entry is lower than for, say, Apocalypse World itself.

How would I use this book: I do like this game, and I would not mind trying it. Unfortunately, it seems like the kind of game that needs a good number of sessions for it to really fly, and that is not likely to happen any time soon. And if I got the chance, I have other things I would probably prioritise: Apocalypse World if I wanted a post apocalyptic game, Kingdom if I wanted to tell a story of a community, Microscope if I wanted to tell a story spanning long stretches of history.

As such, I am most likely to only ever use the book as inspiration, stealing the concept of the Family Playbooks to use in another game, whether PbtA or something else.

2 thoughts on “1st of December: Legacy: Life among the Ruins”